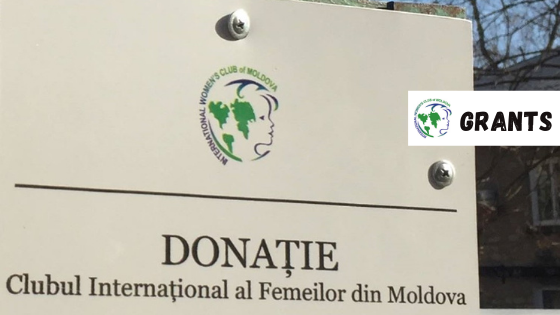 IWCM charity work is all about making a positive difference in Moldova by devoting our resources and time to causes we believe in. We like to support causes which bring positive social returns and/or deal with economic empowerment of women. Our grants have funded a wide range of projects throughout the country which benefit those in need, especially women and children.

Our charity work can only happen thanks to the help and generosity of our local and international sponsors, supporters and members and we remain deeply grateful for their assistance.

The major fundrising event of the IWCM is the International Charity Bazaar which traditionally takes place every year during the first weekend in December. Over the last 5 years we raised over 3.000.000 MDL. supporting numerous projects and charitable causes.

If you would like to apply for the IWCM Grant, please download as a Word document this form, fill in the project information and send it as an attachment to iwcmgrants@gmail.com.

This form can be found by following this LINK.

Return your application form for approval not later than by 5pm on the 15th November of the Grant Cycle to iwcmgrants@gmail.com. Applications submitted after this deadline will unfortunately not be accepted for this financial year

The IWMC Grants Committee is made up of national and international members of the IWCM. They will examine your application in full and you will be notified about the outcome once a decision has been made.

We wish you the very best of success and we look forward to working with you in the future on your projects.

1. Project full proposal will be evaluated primarily on the following criteria:

3. No beneficiary group will receive more than one grant in a two year period

5. Funds will be allocated after the International Charity Bazaar at a date to be determined but no later than May 30th of the Grant Cycle.

Organizations and establishments which received assistance from IWCM