The Sraseni Internat (orphanage/boarding school) is one of the bigges institutions of this type in the Republic of Moldova. In 2007 the orphanage received a grant from the IWCM to support sewing courses for teenage girls from 13 to 16 years old. The aim of the project was to contribute to the prevention of illegal migration and child trafficking through teaching vocational skills. In 2009 the IWCM again selected the Straseni orphanage as the best suitable recipient of funds raised at the Night of Art 2009. The IWCM bought materials for sewing and carpentry lessons imparting life skills and developing knowledge that will be useful to the teenagers seeking future employment in these fields.

1. Centrul ftiziopneumologic de reabilitare pentru copii "Tirnova" (the TB Rehab Centre for Children, Tirnova) is a state-run facility for children aged 4 to 16 who are either recovering from tuberculosis, or who are at risk of contracting the disease. It currently treats around 200 children from different social backgrounds including disadvantaged families and children's homes throughout Moldova. A typical stay is 4-8 months, although some children have to stay much longer (a year or even more) and others are returners. In constant use since 1962, the buildings and utilities are now in extremely poor condition and the centre is in urgent need of everything from major renovation works to basic, everyday items such as cups, bedding and books etc. In 2010 the centre received an IWCM grant from the proceeds of the Winter Bazaar 2009. See 2010 Beneficiaries for more details.

2. Scoala Auxiliara - Internat (Special Needs School and Children's Home) in the village of Razalai in the Singerei region of Moldova is home to around 86 boys and girls from 7 to 16 years of age. All of them have learning difficulties, some also have physical disabilities and some have Downs syndrome. The institution first came to the attention of the IWCM in 2008. Their well had dried up during the drought and the IWCM provided emergency funds to fix a pipe to their grounds to keep their water flowing. The IWCM made them a beneficiary of the 2009 Winter Bazaar and with the money raised provided the children with much needed blankets, sheets, pillow cases, towels and slippers. 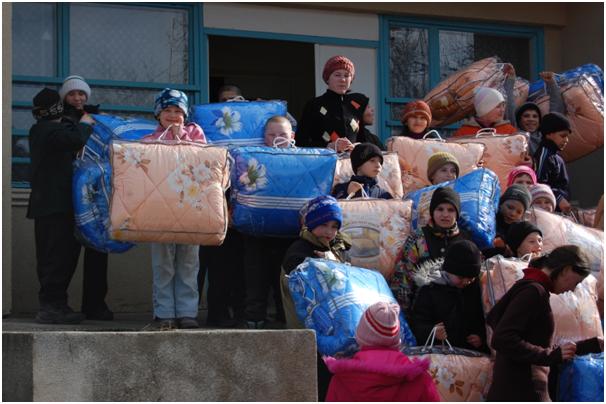 Children at the Scoala Auxiliara - Internat with their new blankets